Required Reading: "On The Edge: The Spectacular Rise And Fall Of Commodore" by Brian Bagnall 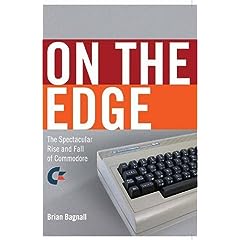 I have to admit, when I avoided reading On The Edge: The Spectacular Rise And Fall Of Commodore by Brian Bagnall for about 12 months for one reason: Commodore. The name makes me throw-up in mouth a little. Being an ardent and fastidious Atari fan, a book about Commodore seemed to be too much to bear. I had to live through Commodore destroying the market for the best home computer ever made (The Atari 800) back in the 80’s, why would I want to re-live it again? Why would I want to read some Commodore fan-boy’s account of his favorite computer?

Well, I was wrong. After reading Brian Bagnall’s book, I have a new appreciation for Commodore and its early engineers (mostly Chuck Peddle). Bagnall’s book is far from a fan-boy tome, but instead a very professional “alternate” history of the personal computer. It’s a history that other great books like Fire In The Valley by Freiberger and Swain ,Accidental Empires by Bob Cringely, and and the criminally underrated Hackers by Steven Levy missed when they were first written. Disregarding the absurd notion that Steve Jobs and Steve Wozniak invented “personal computer”, Bagnall digs back to the early beginnings of the microprocessor that made the first round of viable personal computers afforable: the MOS Technologies 6502. Using a multitude of interviews and other sources, the author takes us into meetings, engineering sessions, and trade shows demostrations, taking the time to painstakingly paint a picture of the real pioneers who created the personal computer.

The picture Bagnall creates is not all rosey. Commodore, and later Atari, head Jack Tramiel does not get any kind of reprieve (although his sons are painted in light I had not read before). Tramiel used the same “business is war” tactics at Commdore that most Atari fans should be fully aware of after his tenure at the worlds’s first video game company. Bagnall focuses on the the mistakes as well of the triumphs, painting an overall picture that is far from the fan-boy account I was expecting. For Atari fans, there is some good content here. Back-story information on the creation of Atari products, parallel stories of the Amiga that will make Atari ST fans nod their heads in agreement, and good solid content on Atari engineer Jay Miner as well as others. Don’t be mistaken though, the story is really all Commodore, and what a story it is! I found myself getting engrossed in the characters and their exploits, and surprisingly, rooting for their victories and wincing at their tragedies. The book reads like a good novel, with heroes, villains and an inescapable yet fitting conclusion that, while not surprising, is worth 500+ pages of reading to get there. ANY fan of early vintage computers would be doing themselves a disservice by not reading this book.