Two Great New Video Game Books You Should Check Out

It appears that we are in a “gaming book” renaissance the likes of which we have not seen since the  since the early parts of the 21st century when Dungeons And Dreamers, Masters Of Doom, and The First Quarter all fascinated us with inside stories of games being made and played.

While there have been a few good books in the past few years including Vintage Games,  Dungeons And Desktops,  and Racing The Beam,  just last year we got the phenomenal Replay, and now two more books that are sure to delight the connoisseur of video game history have flung out of the gates. 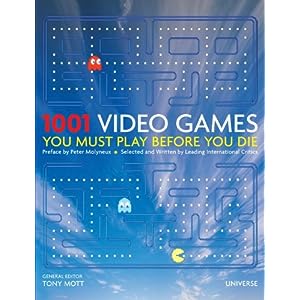 The first book is 1001 video Games You Must Play Before You Die.  This hefty tome makes a valiant attempt to cover the evolution of games by covering great ideas and great innovations, one game at time, chronologically.   I’m not going to spoil the content, but what I will say is that you will be excited by what is included, but will also probably attempt to make your own list of 1001 alternate games that would be just as valid.   It’s a fun book to read for few minutes at a time, and it certainly will get your mind racing, either to play some games you have not heard about, or to furiously come-up with your own list of what was missed.

The second book , All Your Base Belong To Us, is even better.  Author Harold Goldberg has done a wonderful job with this one.  He tells the story of video games in short narrative,  biographical chapters about the people involved in the evolution of the medium.  His writing is crisp and interesting.    The best compliment I can give the book is that it reminds me of the best technology history book ever written, Hackers by Steven Levy, and I don’t say that lightly.

(By the way, there are no affiliate links or anything sneaky attached to the links to amazon above, they are simply provided for your own connivence)