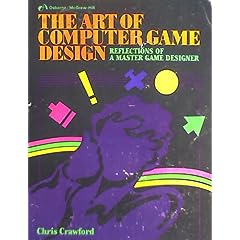 By all rights, Chris Crawford’s book The Art Of computer Game Design  should be a mere relic in the eyes of modern game designers. Sure, in 1984 it was the first serious book written by a computer game designer/programmer about the design of games, but at 33 years old it would seem to be too old to hold any really useful information about the design of modern games, right?

With “casual” games taking center-stage thanks to the efforts of mobile, web-based game programmers, the Nintendo 3DS & Wii U consoles, Steam plus the XBox Live Arcade and the  Playstation Store the lessons of early game designer/programmers like Crawford can be both handy, and at times, down-right golden. As well, designers of games for any level or platform could do well to digest some of the more universal topics in this book.

Crawford first chapter, “What Is A Game?” does a fine job of setting the tone for what lies ahead. Crawford jumps right-in with a serious discussion of why game are important to humans, about conflict, and the importance of interaction in video and computer games. This is not a book that is steeped in the details of implementation, or the exact features of any one game type, but instead it is designed to make the reader really think about games and exactly what they are trying to accomplish when designing/programming a game. The key take-away from this chapter are Crawford’s thoughts on “interaction”. Basically, without interaction you don’t have a game, and in Crawford’s world, quality of interaction is directly proportional to the quality of your game.

The second chapter in the book, “Why Do People Play Games?” takes a deep look at the motivations people have for playing games. Crawford, while admitting that many people play games for differing reasons (exploration, proving oneself, social, etc.), states that much of the desire of playing games comes from an innate human need to “learn”. Crawford writes

Crawford does not say that every game should be “educational”, but that the process of learning is part of why people play games. As game designers and programmers we can learn to create more addictive games by tapping into this need. Giving players the ability to learn patterns or discover the “hidden” rules beneath the game’s surface are just a couple ways of satisfying this need without hitting players over the head with “lessons”.

Crawford’s third chapter, “A Taxonomy Of Computer Games” is light on text, but surprisingly complete in scope, even though it was compiled in 1982. While it focuses on the prevalent type of game for the age (arcade style contests), this is not all that bad in particular for programmers/designers of web-based games because the lion’s share of on-line games still fall into this category. What is surprising from his list are how few game genres have been created since 1982. First-Person shooters fall under “Skill And Action”, “Real Time Strategy” in War games, the “Sims” style games in the “relationship” category. The only genre he does not specifically cover is MMORPGs, but he does state “So far, however, few games have been marketed that truly capture the spirit of D&D“, which in some sense, is the point of MMORPGs.

Chapter Four “Game Technologies” seems like it would veer the farthest from modern games, but again, Crawford talks in such universal terms that his lessons are still very useful today. His thoughts on game interfaces and information interaction between the game and the player, and how they effect the success of game are still extremely important , as are his feelings on keeping the game design “clean” and free of special-case elements that don’t support the main functions of the game. Crawford even takes the role of an prophet of sorts, pointing out that one of the most compelling thing about computer games is “ is their ability to utilize data transfer over telephone lines for game play. The use of telecommunications for game play makes possible game structures that are out of the reach of other technologies. It allows us to create games with huge numbers of players. “

Chapter 5 “The Game Design Sequence” is a complete strategy for designing and developing a game. While it is very light on the actual programming implementation, Crawford’s main idea is that the research, planning and design of your game are much more important than the programming phase .Crawford writes “Seldom has a game failed solely because the programmer lacked the requisite programming skills. Games have failed to live up to their potential because the programmer did not expend enough effort, or rushed the job…” Crawford’s experience with games he “did not” finish are very important here. His thoughts on “aborting” a project before you have invested too much effort is something I plan to tape to my wall:

“The last and most crucial decision is the decision to abort the game or proceed. It should be made now, before you commit to programming the game. Do not hesitate to abort the game now; even if you abort now you will still have I earned a great deal and can say that the effort was worthwhile. A decision to give up at a later stage will entail a real loss, so give this option careful consideration now while you can still do it without major loss. Abort if the game no longer excites you. Abort if you have doubts about its likelihood of success. Abort if you are unsure that you can successfully implement it. I have in my files nearly a hundred game ideas; of these, I have explored at length some 30 to 40. Of these, all but eight were aborted in the design stage”

Chapter 6 “Design Techniques And Ideals” is a grab-bag of sorts containing content on a variety of topics that dig deeper into game design. These include game balancing, learning curves, and the relationships of game opponents. Not all of these will be useful to everyone, but then Crawford’s main thrust of this chapter is not necessarily the digestion of all these topics. Instead, Crawford encourages style and technique for creating games. It appears that Crawford is saying “this is how I do it, you might not do it this way, but find some way to do it, and stick with it.”

Chapter 7: “The Future Of Computer Games” is an extremely interesting read. especially for something written in 1982. Crawford plays the role of prophet again, but this time for an entire chapter. His thoughts on how personal computers will transform society are especially compelling:

“We therefore expect that personal computers will change the face of American society. We expect that networking will allow more Americans to participate in economic activities from the home, decreasing the load on transportation and accelerating the pace of economic life. The ease of manipulating information will give information an even more prominent role in our society. Our financial system will become less dependent on currency. Our lives will be changed by these machines.“

Even more compelling are Crawford’s thoughts on what computer and video games would become as they moved to the mass market:

As computer games become a mass market item, they will fall prey to the homogenizing forces of the mass market. The emphasis will not be on originality or creativity, but rather on adhering to the time-honored formulas. Just as movies and television fell prey to the formulas of sex and violence, cops and robbers, sitcoms, and the other mechanical incantations of the mass media, so too will games fall victim to the tyranny of the mass market. (Are my biases showing?) We will see an emphasis on delivering the same game over and over in new clothing. My guess is that we are already caught in the grip of this force, for we are producing little more than variations on a single theme: “blast the monsters!”. This has sold well, so we stick with it.

Chapter 8 “The Development Of Excalibur” is an interesting “warts and all” view into Chris Crawford using some of the techniques he previously described in the design of a game. This chapter is fascinating, but to get the most out of it you need to really you enjoy the history of Atari, or have owned and played the Excalibur game on an Atari 800 computer. For Chris Crawford, Excalibur was the first battle in a life-long quest to create a game that modeled true human relationships.

Not everything in the book translates completely,  and some of the ideas in the book show their age. In Chapter 4 Crawford advises programmers “as you look over your program listing, you should inspect each byte and ask yourself, ‘Am I getting my money’s worth from this byte?’. These concepts may appear outdated in this day of ultra-fast machines, gigabytes of memory.  However, the basic concepts of these ideas still hold a lot of truth.  Efficient programming can make the performance of the game much better and maintainability of the code far easier than a sloppy design.  As well, HTML5, AR/VR/MR/XR game programmers in particular should be familiar with trying to compress every byte they can out of graphics, sounds, and even their own code to create a game with a reasonable download size and frame-rate. Also, some of the language in the book might make the actual content seem less than useful, which would be a mistake. For instance, Crawford’s use of the term “artificial smarts” instead of “artificial intelligence” in Chapter 6 might seem quaint, but the lesson of the chapter is still valuable.

In the mid-1990’s, long after this book was published, Chris Crawford became as pariah of sorts to the game industry because he continued to beat the drum on the topics he so eloquently states in “Chapter 7 The Future Of Computer Games”. After being kicked out of the Game Developers Conference, a gathering he himself created, he left the game industry completely. Actually, to be fair, the game industry left him. It’s really too bad, because people who can see 23 years into the future like Crawford did in 1984 should be leaders in the game industry, not shoved aside so the alpha-squad can make excuses for churning out the same games over and over. Crawford resurfaced a few years ago with another great book named “On Game Design” that further refined his game development techniques. He is currently finishing up the beta version of his interactive fiction system “Storytron“, an idea that saw it’s genesis in the final pages of The Art Of computer Game Design.

Note: The Art Of computer Game Design has been freely available online since 1997.

He has been working on a game project that incorporates his theories named Siboot for several years now.  We hope he and his team finish soon so we can all enjoy the game.